The POEM Committee is calling on the Member for Bega and Minister for Transport, Andrew Constance to establish an independent inquiry into the long stalled Snug Cove Safe Harbour project or call for competitive tenders for the agreed attenuator.

The reason is simple. After costing over $3m of taxpayers’ money, over 8 years of countless meetings, multiple consultancies and considerable personal expense, the Snug Cove Safe Harbour project has not delivered any benefit for the Eden community or the boating public and appears most unlikely to do so in the future.

Since 2010 POEM has been consistently lobbying for a wave attenuator that will create a safe harbour and provide the basis for a commercial marina in Snug Cove.

Many people and organisations have given strong support to the Snug Cove Safe Harbour project over the last decade because it can provide a wide range of jobs, increased tourism, better business in the town and greater overall investment for 365 days every year.

Close to the dangerous Bass Strait, Eden has the only deepwater harbour between Sydney and Tasmania and Melbourne. It is acknowledged by all the experts as the perfect location for an all weather marina on the NSW South Coast.

After years of studies and negotiations, POEM and the key departments agreed in mid 2018 on the alignment and design of the attenuator which is displayed in a shop window in the middle of Eden

The Government did not go out for competitive tenders but asked the company that built wharf extension to quote for this project. The company was in financial difficulties. It submitted a ridiculously high price and promptly went into liquidation.

The Government is now claiming that the agreed attenuator is too expensive. They are developing a cheaper, radically modified design which, we believe, will neither provide for a safe harbour nor enable a marina ever to be to be built in Snug Cove. This will be permanent loss to the community looking for economic recovery.

One of the most senior marina designers in Australia has advised POEM, that the agreed attenuator can easily be built within the project budget of $19m. His advice is based on the actual verified cost of a recently built and similar attenuator in Tasmania. The Government is refusing to even consider this advice or obtain competitive tenders.

To put it mildly, there are many unanswered questions about this whole project. An independent inquiry into this potential major setback for the community seems the only way forward if competitive tenders are not held.

POEM is a non profit community association formed in 2010 to promote jobs, investment and tourism in Eden through the development of a Safe Harbour with scope for a commercial marina. 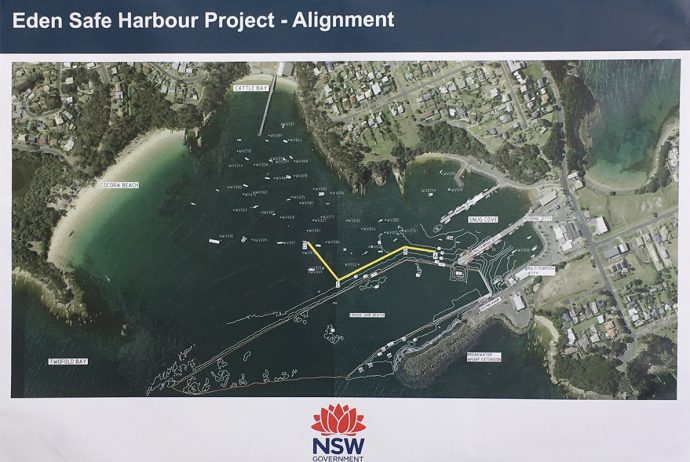